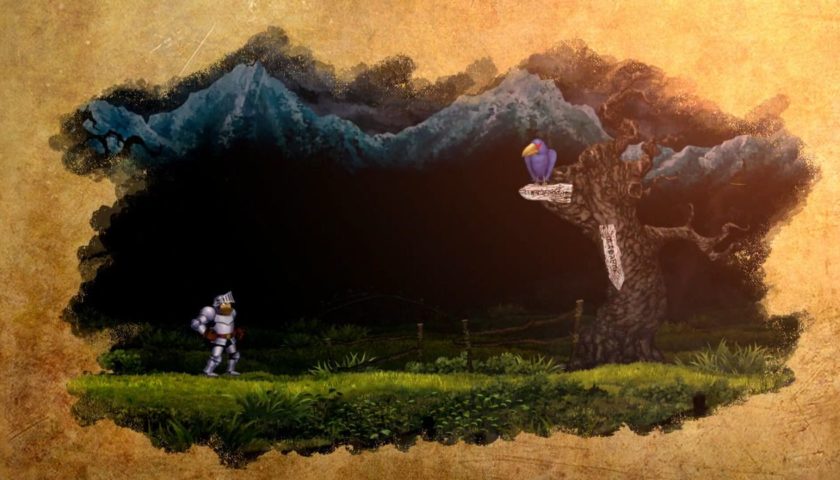 The “reinterpretation” Ghosts ‘n Goblins Resurrection has also been available for PlayStation 4, Xbox One and PCs via Steam for a few days. So far, Arthur’s Return was only available digitally for Nintendo Switch on February 25th.

Platforming games have regained popularity in recent years and Capcom has seized the opportunity and breathed life back into a real classic. We had the opportunity to ask producer Yoshiaki Hirabayashi a few questions about the game and his work.

Together we talked about the new popularity of the genre, about working with the director of the original, about levels of difficulty and of course about a possible future for the series.

Platforming games have become very popular again in recent years. Many indie studios have created great games. And some of them were also very, very hard. Presumably, this renewed popularity of the genre has also helped to give Ghosts ‘n Goblins a stage again, hasn’t it?

Yoshiaki Hirabayashi: The renewed popularity of platform games was, of course, a factor. I don’t think most of the games coming out have been in the same super-tough mould as Ghosts ‘n Goblins, but it was a great opportunity for us to revive this series.

Yoshiaki Hirabayashi, you’ve dedicated almost your entire career so far to Resident Evil. Did you volunteer for Ghosts ‘n Goblins? (laughs) Do you have a connection to the original Ghosts ‘n Goblins? That was indeed a really long time ago.

Hirabayashi: I can’t really tell you about the internal background of how I came to work on the project, but I have played the original game when I was a child (although I couldn’t finish it!). When I came on board I was able to learn about the original game director Tokuro Fujiwara’s attitude and approach, and the support that the series has from its passionate fanbase. This got me motivated to bring a new game in the series to as many players as possible!

You said in a developer diary that the series director from back then was able to work on Resurrection. Tokuro Fujiawara is now CEO of Whoopee Camp. What did this collaboration look like, what helpful tips were you able to get from the creator of the original? What decision-making power did Fujiawara have?

Hirabayashi: You can consider Resurrection to be the intentions of Mr. Fujiwara translated directly into a game! He’s a legend and a huge inspiration to me. This game was the first time I worked directly with him and I was able to hear all kinds of anecdotes about his experience developing the series. I was a bit nervous at first but it was a really stimulating collaboration and he was able to answer my questions really clearly. I particularly remember how he helped me to understand that GNG is not a series which is “just very difficult”, and that it was about providing an amazing sense of achievement to players. That’s something that became a key aspect of the new title.

Ghosts ‘n Goblins is known for being difficult. You may know that there are often discussions about possible easier difficulty levels in Souls-games. Many fans of the games are against this development. A Souls game would be a different game if it were easy. Resurrection offers several difficulty levels. Arthur can take more damage, or the number of enemies varies. There’s also Page mode, which they specifically say doesn’t offer the Ghosts ‘n Goblins experience. Can you give us some insight into the decision making for that?

Hirabayashi: This ties in with the previous answer, but as I said, Mr. Fujiwara is very clear that the game should not just be very difficult but aims to provide satisfaction and a feeling of achievement when you can beat the challenges it sets. Since players come to the game with a variety of skill and experience levels, we felt that the game should have challenges suited to that. If each player finds the difficulty level that suits them and provides a meaty challenge for them which they feel great about beating, I think they can have a great experience with the game. And of course, if you get better while playing you can ramp up the challenge if you feel it’s getting too easy for you!

The graphics look comic book-ish, like an artbook. Arthur’s animations remind me of 90s comics and animation, but also of the original. But you could have also chosen a pixel art look, which is also very popular at the moment. Tell us something about the choice of art style.

Hirabayashi: The idea of a “horror theme park” is one of the basic concepts of this series, so in other words, something which is creepy yet comical and not too scary. We felt that 2D was the best way to bring a touch of analogue warmth when expressing that. I hope that you can appreciate when playing the game that it shows how much depth can be brought to a 2D game!

Hirabayashi: Yeah, when adding new elements to a game, it means you have to ensure to balance them out. This involves imagining how the player will use them and in the case of this game, since we want people to take on tough challenges, we treated the weapons and spells as tools they could use to inspire their strategies on how to overcome those challenges and get to the sense of achievement on the other side of them.

The music from Resurrection almost reminds me a little of a theme park. When I hear the music from the announcement video, I can literally see a creepy carny booth in front of me! I know this music from the original, but it has been completely rearranged, hasn’t it? What kind of effort did you put into this?

Hirabayashi: I’m really glad you said that, because, exactly, a theme park was the kind of atmosphere we were going for! The music is one of the motifs of the series and while as you said there are new arrangements of classic tracks, there’s also new music too which I hope you enjoy in combination with the “golden oldies”!

The „Three Wise Guys“ look very funny. Such co-op modes can only escalate! (laughs) The idea came from Tokuro Fujiawara, is that right? Do you really think people can suppress their evilness and actually play together? (laughs)

Hirabayashi: Well, Mr. Fujiwara did say that a bit of mischief among players is one of the joys of co-op! So what you’ve said is exactly the kind of thing I think he was imagining. From the start we wanted to have the kind of fun you only get from couch co-op where you’re in the same room with the other player. You may come to blows sometimes but overall, you get through the game and you have a blast. This is also a great way for players of all ages to enjoy the game across generations – perhaps a parent who is familiar with the classic games would like to hand a controller to their child and show them how it’s done! Although perhaps today’s gaming-literate children can also teach their parents a thing or two as well!

When Ghosts ‘n Goblins is also available for Xbox, PlayStation and PCs, most of the work should be done. Have you thought about DLC yet? Arthur is a legend, of course. But I could well imagine a new playable character. Or something else? Are there any plans or thoughts? Also, I’m sure you know that fans want a physical release. What has to happen for that? (laughs)

Hirabayashi: Thanks for your enthusiasm for the game! At the moment we’re fully focusing on bringing the multiplatform launch to completion.

I have to ask it of course: what does the future of Ghosts ‘n Goblins look like? Resurrection for Nintendo Switch has received very good reviews. Are the sales figures also within their expectations? When you make a game like Resurrection, which is based on the original but is actually a completely new development, surely a brand new Ghosts ‘n Goblins is not impossible?

Hirabayashi: I’ve been really glad to see so many Switch players enjoy the game since its release, and I’m excited to get it in the hands of even more players with the multiplatform versions so that everyone can take on the meaty but satisfying challenge the game offers. It’s flattering that you’re already thinking of follow-up games, but for now I think there’s plenty in the game to explore, like using the Magic Metronome to speed up the gameplay or finding all the collectibles. Something great might happen if you manage to find all of the Demon Orbs!

Many thanks, Mr. Hirabayashi!