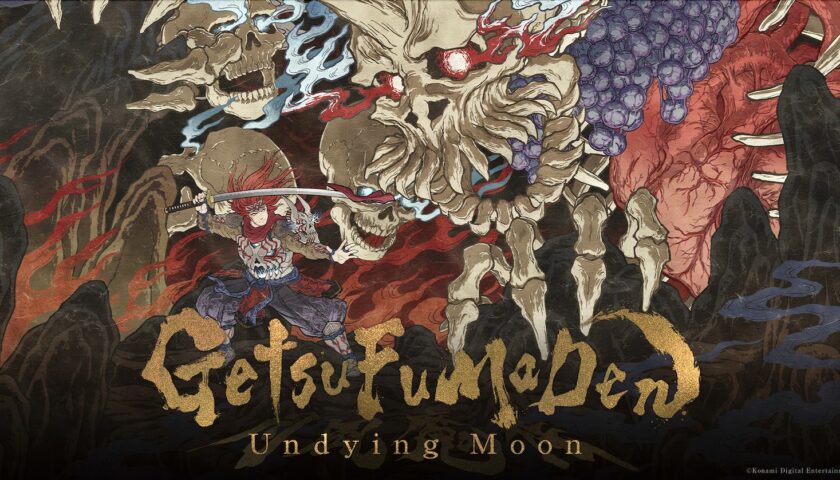 A few weeks ago Konami surprised us by announcing a new game called GetsuFumaDen: Undying Moon. Some retro experts pricked up their ears, because GetsuFumaDen has existed before. You may remember Konami’s Getsu Fūma Den, released in 1987 exclusively for Famicom and only in Japan.

With GetsuFumaDen: Undying Moon, Konami is developing a Roguevania 2D action game together with the indie studio GuruGuru, which is only loosely based on the original. GetsuFumaDen is currently in Early Access on Steam and already announced for Nintendo Switch.

We had the chance to ask lead producer Shin Murato a few questions. We talked about the unusual graphic style and about this new approach, developing new games with indies. But also about the „Early Access“ model and the Konami Code. We hope you will be entertained. Have fun!

I watched a video of GetsuFumaDen for Famicom. I recognise it in Undying Moon, but you could have used any other graphic style for the new version. For example, you could have used pixel art, which is very popular at the moment, but you went for the beautiful ukiyo-e art. It is not very widespread in the West. How did you come to make this decision and did you think about whether it might appeal to Western players?

As we are a Japanese game company, we wanted to create authentic art that would attract global attention to Japanese style. We have been inspired by many indie titles that have been designed freely, without the concern of following trends in the game industry, and wanted to follow suit. As for Western players, there were already several popular games with Japanese themes and sumie-style, so we felt ours would also appeal to them.

However, we wanted to be a bit different and decided to use print-style such as inferno (art in Japanese middle ages) with the theme of hell in order to capture exactly what GetsuFumaDen is about.

When I saw the first trailer, I could hardly concentrate on the gameplay! The beautiful backgrounds had my attention, which I really liked. They are in motion and that also gives more dynamics to the action in the foreground. And they almost tell their own story. Can you tell us more about that?

Thank you for noticing – it was quite a complicated process for us. To express the taste of Japanese art like inferno which GetsuFumaDen aims for, we had to consider the structure of different views (distant, middle and near) in the point of background, as that is the essential element. Not only that, but we also had to focus on effects such as fire or smoke. GuruGuru tried so hard to express such visual structure while developing stages which are also constructed randomly.

Besides the backgrounds, I was also excited by the boss monster in the first trailer. I’m sure the ukiyo-e style has its share in that. I’m sure some artists only work on the bosses. And they look like they would be difficult to defeat. Is that true? And will the game offer several difficulty levels?

Thank you for your high evaluation! Regarding the boss monster, it is one of the elements that we worked so hard on during the development. We tried hard to create bosses on each stage, to add unique design or gimmick showing varied impact on each stage, etc. Stay tuned for the stages which we haven’t disclosed in our announcement trailer and for new bosses which we will plan to add in the future.

We will have various difficulty options, but these will be unlocked as you progress. There is a difficulty level for hardcore gamers. However, we have introduced the system which decreases the difficulty level, as we want as many players as possible to enjoy this game. 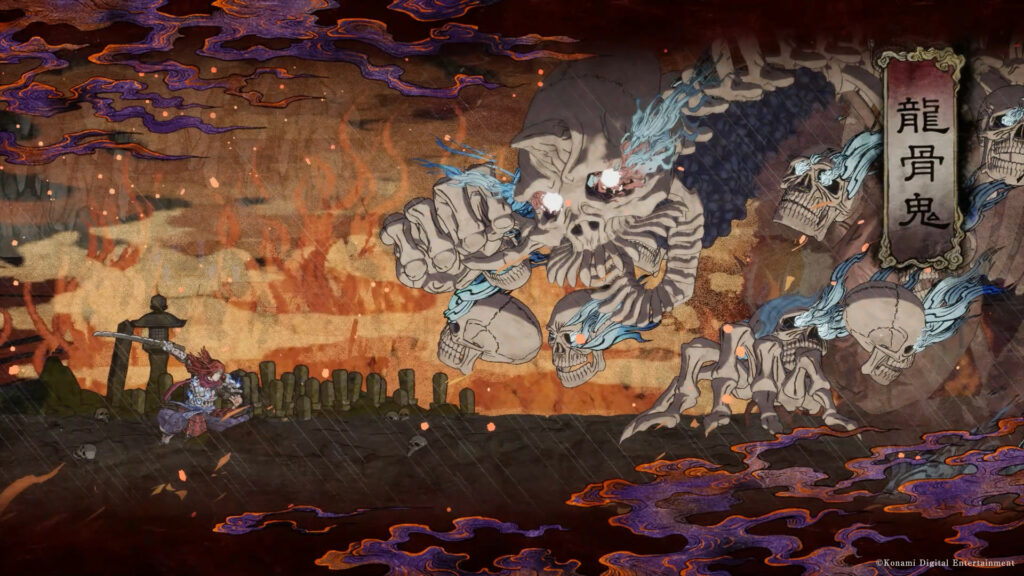 The user interface looks very intuitive. I can obviously trigger certain attacks with just one button press and also use items like potions quickly. Which and how many skills can the
main character learn? Can the buttons be freely configured?

Thank you. Because this game is speedy action, we designed it to enable players to do specific actions they want. In that point, there are less buttons that players can use. There is a button configuration system. However, the development team feels the current system is not enough, and we would like to adjust as soon as we can. There are various skills that main characters can learn such as collecting weapons/subweapons, enhancing them, enhancing characters‘ abilities or passive skills etc.

Early Access is certainly a new experience for you and the team, but I think you are looking forward to it. Working so closely with the players, that will certainly be interesting. What will be the scope of the game at the Early Access launch?

Our main idea is to use Early Access to listen to players and create discussion, so that we can further increase the quality of the game before opening it up for a wider audience. GetsuFumaDen is in an Early Access version at the moment, but it still has a lot to offer. There are many weapons available to use and the combat systems and boss monsters are ready for players. We have 8 stages to offer in Early Access and GetsuFumaDen is playable in 11 different languages. For the full version, we will add several stages, weapons and playable characters. Also, there will be adjustments made to the game balance as well as other various optimizations.

The Konami Code recently turned 35 years old. It dates back to Famicom times and GetsuFumaDen: Undying Moon is based on a Famicom game in the basic idea. You have to include the Konami Code, right?

We couldn’t make it for early access version! I’m sorry for making you disappointed. However, we will plan to add in the future, so please stay tuned!

GetsuFumaDen: Undiying Moon is being developed by GuruGuru, an indie studio. How did the choice of GuruGuru come about? Outsourcing development of prominent old IPs is very popular at the moment. I’m also thinking of Sega’s Streets of Rage, for example. Could it be that Konami is outsourcing more old brands?

We are continually inspired by various indie titles, and how they innovate and produce exciting games. We felt that GetsuFumaDen would be an interesting IP to bring back to follow this indie approach, and so we decided to contact GuruGuru as we know the team well. They had been exploring new approaches for graphical design and thought they would be a great fit for this IP. It also helped that there were fans of the original GetsuFumaDen game within the GuruGuru team. In terms of other collaborations, please wait for future projects like this! 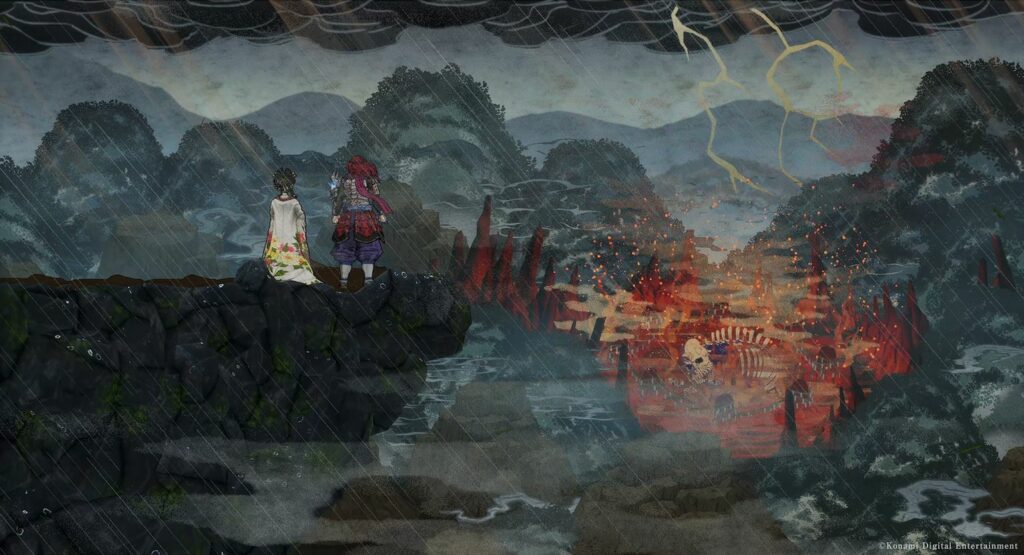 GetsuFumaDen: Undying Moon looks too beautiful and it would be a real shame if the artbook is only available digitally. Are there any plans for a retail version for Nintendo Switch? If so, then maybe an artbook could be included?

Unfortunately we can’t share any details about that at the moment.

Thank you very much for your time!