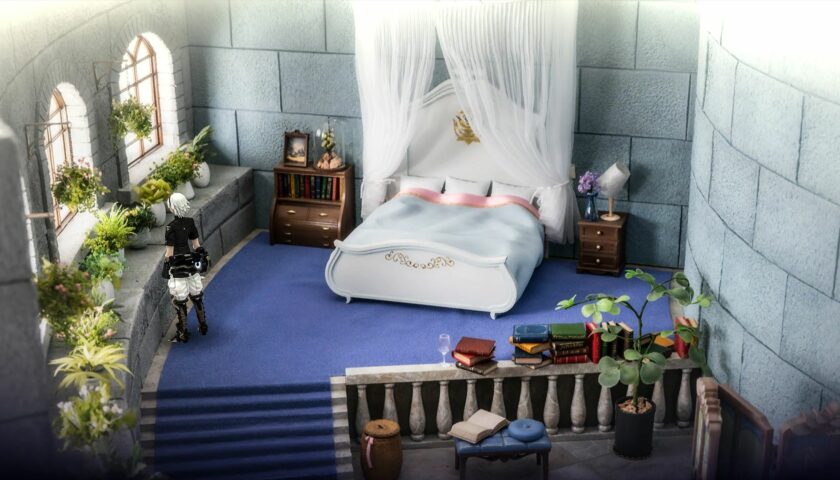 Fantasian has been available exclusively for Apple Arcade for some time. It’s the new game from Hironobu Sakaguchi and Mistwalker. You are of course familiar with Sakaguchi. He launched Final Fantasy in 1987 with colleagues such as Nobuo Uematsu, Hiromichi Tanaka and Akitoshi Kawazu. As early as 2004 – that was quite a while ago – Sakaguchi left Square to start his own company with Mistwalker. There, for example, Lost Odyssey and The Last Story were created.

We had the great opportunity to ask Hironobu Sakaguchi some questions about Fantasian. We talk about the dioramas and the excessive work on them, about the daily routine of Hironobu Sakaguchi. About remakes of his old games. And how he once was convinced of changes to his concept of the „Active Time Battle“.

In all those years I had the opportunity to meet a lot Japanese developers. I met Uematsu-san in Cologne in 2011 – a dream coming true. He told me back then that he played Lost Odyssey and Blue Dragon only half-way through. I bet he didn’t tell you that at all, did he? (smiles)

Sakaguchi: I did not know that (smiles).

Your latest game is called Fantasian and looks fantastic. I have seen a behind the scenes video on Twitter about it. The art is delicate and the results are wonderful. Please tell us more about the artists work. I have read that those artists are working in the Tokusatsu industry for a while now. How long does an artist work on such a diorama?

The dioramas vary in size, but a lot of them are approximately 2m x 1m. „Interior“ sets are about 50cm x 50cm. Producing the dioramas on average takes about 3 months. Some of the more elaborate sets could take as long as 6 months, however.

We worked with various diorama artists across 10 different companies, including some famous „tokusatsu“ artists in Japanese cinema history, model train kit companies, doll-house makers and even companies that create physical models of architectural structures. All-in-all, there were about 150 individuals involved in hand-crafting the dioramas.

Each company had its strengths and weaknesses, some favoring more natural landscapes and others excelling at the more „man-made“ structures, like the Thaumatech factory in the beginning of the game. We tried to leverage everyone’s strengths with assigning different set-pieces to different studios.

Do you know Octopath Traveler? It also has that diorama look and I like it equally. But it is purely digital whereas Fantasian is based on „real“ dioramas. Can you explain to us how you transferred those dioramas into the game? How much did you have to digitally post-process those?

»Fantasian’s dioramas are first photographed from about 200~300 different angles. Then are processed through a pipeline.«

I have not played it myself, but I do know about it. I think it’s a beautifully made pixel-art game.

Fantasian’s dioramas are first photographed from about 200~300 different angles. Then, those photographs are processed through a pipeline commonly used to create 3D models of entire cities, which is how we are able to import the diorama’s 3D data into the game engine.

Meanwhile, we bring the dioramas to a photo studio, where the sets are well-lit to be photographed. The studio photographs of the dioramas are then projection mapped to the 3D models.

This pipeline produces visuals that make the players feel like they’re actually walking through the dioramas, much more so than if we had simply used the photographs as textures on the 3D models. Likewise, because we have the 3D data, we are able to accurately define collisions in-game as well as add post-processing effects.

Uematsu-san said in an interview that while working on the music for Fantasian, he woke up at 5 am and worked until 6 pm. Then he drank a beer and went to bed. How does a typical Hironobu Sakaguchi day of work look like? I bet you are working a lot, too. But after that you go surfing?

I was not surfing while developing Fantasian. It might have to do with my age, but recently I’ve been waking up as the sun rises while it’s still a bit dark outside.

»That goes on until about 7 pm, which is when I have dinner and open a bottle of wine. There are few things I enjoy more than this moment in the day.«

As for my routine, I will step out on the patio connected to my office and check the sunrise’s colors. If it’s really beautiful, I’ll photograph the sky for a while. [Note: This can also be seen very well on his Twitter account.]

Then, I’ll make some coffee and head for my desk, at which point it’s almost midnight in Japan, so I can sneak in a few messages in real-time with the team in Japan. Now I’m ready to dive into my own work.

Around 3 pm my time, it’s 10 am in Japan, so people begin to show up in the office. I might have some meetings with them. That goes on until about 7 pm, which is when I have dinner and open a bottle of wine. There are few things I enjoy more than this moment in the day.

After dinner, I might watch a movie and finally sleep around 11 pm.

I met Uematsu-san as an incredibly nice person back in 2011. I was very nervous during our interview. But he was really calm which helped a lot. He has so much fun with music even after all these years. You are working with Uematsu-san for decades now. I bet you also have become friends. How can we imagine you two collaborating together?

All work related interactions are done via email. We’re both a little bit shy, so certain things we couldn’t say to each other’s face, we’re more comfortable putting into an email.

For example, the topic of „Where do you think human kindness comes from?“ was a pretty deep exchange we had over email. But this process of confirming each other’s understanding of the game’s heavier themes was quite important.

Many of our readers love traditional Japanese RPGs – you as well! I have read that the idea for Fantasian came a few years ago while playing Final Fantasy VI with editors from Famitsu. It is a long way from an initial idea to the beginning of game development. What does this process look like? How did the collaboration with Apple come to be?

It was on February 28th in 2018, when I had the chance to play FF6 with some colleagues of mine who developed the game. After that, I began thinking about Fantasian and completed the very first proposal in June of 2018. Right around 3 months after the broadcast. [Note: Sakaguchi played for Famitsu in front of the camera, you can find the recording here.]

We spent another 6 months from then to complete the story, while simultaneously gathering the Director, Nakamura, Art Director, Ikeda and the rest of the Fantasian team.

The topic of Apple Arcade came up from before the FF6 broadcast. I have two friends inside Apple’s HQ, with whom I would often have dinner together. Those two were part of the Apple Arcade launch team and asked me, „Do you want to make something together?“

You have created Final Fantasy in 1984 but left Square by 2004. Still to this day when you create something new or talk about anything, everything is always compared to Final Fantasy. Are you tired of hearing that? Or are you still attached to the brand? Are you following the new games?

It’s true that I’ve created those games and all projects were a natural extension of what I wanted to make. So, comparing my games to the past FFs is like being compared to my old self, in a way?

Being perfectly honest, I really don’t feel anything when compared.

Fantasian is the result of my playing FF6 with my old colleagues, which gave me the chance to reflect on my own start in the industry. It’s similar to flipping through an old album and reminiscing about what I was feeling a long time ago – tapping into that pure and honest creative energy that I had.

As I’ve aged, there was some sediment that began to cloud my mind, but reflecting on my past helped me approach Fantasian with a much clearer mental state.

I love traditional turn-based games and also random encounters. But many people say that such mechanics are not up-to-date anymore. You have found a brilliant tradeoff with your Dimengeon mechanic which works perfect for mobile games and their concept of gaming. Tell us how this mechanic came to be and how it evolved!

»It felt a shame to interrupt this feeling with random encounters.«

Early in the development cycle, I was controlling my characters in the diorama worlds, and placed a pin on a far away treasure chest many levels away from where my character was.

I wanted to test how well my programmers were doing, but as my character traversed the different maps, I began to enjoy watching my character simply exploring the diorama worlds. It felt a shame to interrupt this feeling with random encounters.

Once we had the idea for the Dimengeon system, we placed caps on the amount of mobs players could stash as well as added the Gimmicks or power ups to make the encounters more satisfying for players. The mechanic underwent several iterations before it reached the form you see today.

You have said in an interview that your concept for developing games is listening to different opinions and incorporating some ideas. Even if those were not part of the initial concept. Sounds like you are a great boss! Can you give us an example from any of your games where you said: „Woah, that idea is much better than my own – let’s do it like this!“?

Take for example the “Active Time Battle” mechanic. When it was initially proposed to introduce the element of time into turn-based battles, I was against the idea. Nonetheless, it seemed important to develop a prototype of the mechanic.

There are several elements of a game that we simply can’t know if it’s fun or not until we try it. In the end, I realized the moment I played with the prototype that the Active Time Battle mechanic was engaging and worth exploring.

„Wow! This is way better than my idea. Let’s run with it!“

The rest is history.

I know it is not necessarily your style to re-release old games. You rather create new ones, realize new visions. Of course I have no idea what the licensing deals and their respective rights look like. But suppose that Microsoft would tell you: „Mr. Sakaguchi, we want to see Lost Odyssey and Fantasian on our Xbox Series!“. Which might be likely, Microsoft wants to grow their Japanese audience! Would you accept and even outsource those projects with enough financial backing?

Remakes require immense energy to create. Even more so if the hardware specs are really high because all the graphics need to be tailored to the hardware. Otherwise, there’s really no point in a remake.

But, when creating a game of that caliber, it’s not much different than creating a completely new game. Given the choice, I would rather apply that energy towards creating a new game.

It’s always fun to come up with new mechanics and ideas as well as stories and world-settings. That, to me, is the biggest source of energy.

Mr. Sakaguchi, thank you very much for your time.